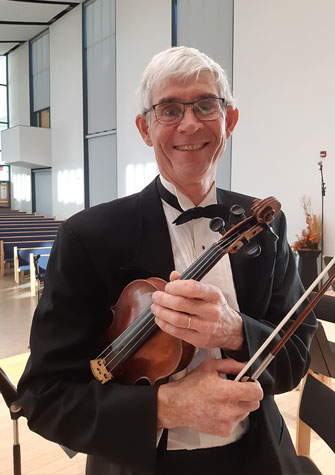 Kirby grew up in Brighton Ontario in a family of five and graduated from East Northumberland Secondary School. He had private lessons on violin and piano and played trombone at school. He played violin in the Eastern Ontario Concert Orchestra (now the Quinte Symphony,) conducted by Stephen Choma, and participated in school bands and choirs. Many summers were spent in Manitoba at his grandparent’s cottage in Whitemouth.

After studying music education, violin, conducting and performing at Western University in London, Kirby taught strings at Grand River Collegiate, in Kitchener, for 31 years. While teaching music and science, he directed full symphony orchestra, strings orchestras and choirs. He continued to perform in many community orchestras including the Woodstock Strings for twenty years. He has also conducted the Waterloo Chamber Players and K-W Intermediate Youth Orchestra.

Kirby and Barb took a year off from teaching in 1995, and along with their three children spent six months in Haiti teaching music, followed by five months of camping throughout Europe. Kirby also sat on the board of the Ontario Music Educators’ Association for 14 years as membership and recording secretary. He also sat on several conference committees and led workshops at conferences.

The Julians, who retired from teaching in June of 2012, have three children, Marielle, Alanna and Todd. There are three grandchildren with Marielle and Tim Burton: Olivia and twins Aurora and Penelope who arrived three months early in February 2012. Two grandchildren with Todd and Tinisha: Alex and Ivy. Gardening, hiking, canoeing, travelling, camping, Nordic skiing, home renovation, orchestra administration and time spent with the family fill many hours. We are currently finishing the interior of a rebuilt “lake house – cottage” on the Stokes River, at Stokes Bay, on the Bruce Peninsula. Kirby currently plays violin or viola in the K-W Chamber Orchestra, Stratford Symphony Orchestra and Waterloo Chamber Players.