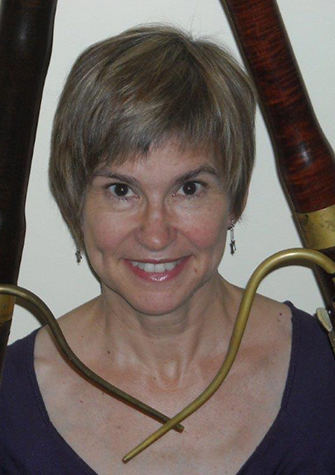 Trained on historical as well as modern bassoon, Heather Carruthers was principal bassoon in the Portland Baroque Orchestra from 1985 to 2001, and at the same time played second bassoon with the Thunder Bay Symphony Orchestra. She performed regularly on baroque and classical bassoon with Tafelmusik (Toronto) and Philharmonia Baroque Orchestra (San Francisco), and recorded CDs with all four aforementioned ensembles.

In 2001 Heather retired from touring and playing. During the next decade she taught music history and bassoon at Brandon University in Manitoba, and also wrote a weekly food column for the Brandon Sun. In 2010 she relocated to Kitchener and has since restarted her career as a bassoonist, playing with Nota Bene Players & Singers, the K-W Woodwind Quintet, and many other groups in southern Ontario. This year will be her first as principal bassoon of the KW Chamber Orchestra. She lives in an Art Deco house with her cat Chicken Tikka.